We got to Berlin in time for the party. They've really got something to celebrate- 20th anniversary of re-unification. Watched all week as sound stages were set up & streets closed.
It's interesting being in a city where so many momentous things have happened in fairly recent times. 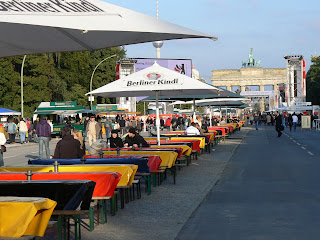 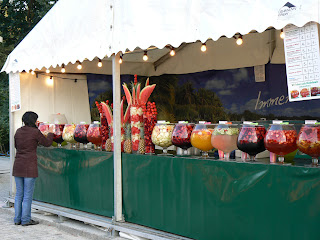 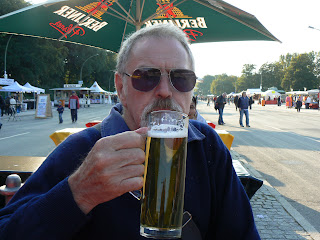 Barry about to down a Berliner Pilsener 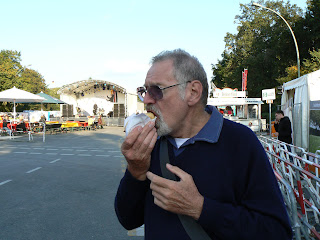 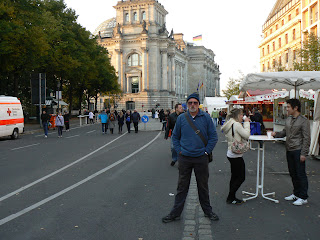 Barry having 2 bob each way- a foot in east & west Berlin. The paver stones down the roads show where the wall was. German parliament- Bundestag is behind him, in the old Reichstag building. Yes- he's wearing a hat. We've found Berlin cold. Gets up to 10 or 12, but I think they use a different sun here- there's no warmth in it. And staying out at night is quite unpleasant. We're glad of the warm clothes which have been taking up space in the suitcases until now,but we need to wear a few of them at once to keep the wind out. 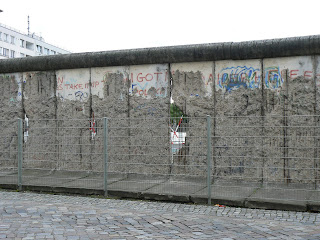 One of the 3 remaining sections of the wall still standing. When the government got around to placing a protection order on it there wasn't much left. Apparently it contains asbestos, so I hope those people who helped knock it down don't suffer for it. 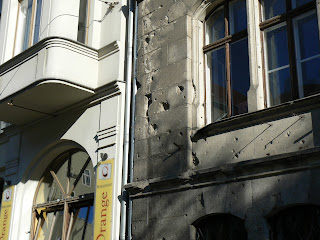 Not difficult to find buildings riddled with bullet holes. There was fierce street fighting when the Russians arrived in 1945 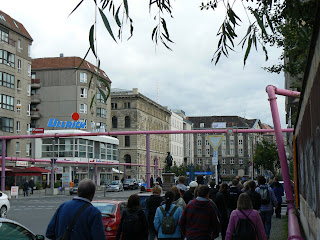 Berlin is built on marshland, so buildings need to have ground water pumped out. Ugly great pipes snake around some streets. For some reason the pipes in this area are pink. Others are blue. I'm sure that's relevant to someone - they can't be male & female. 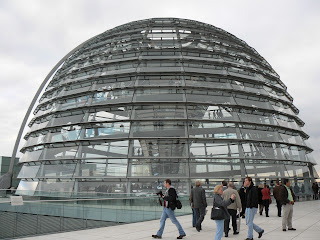 Glass dome over the Bundestag, which is open to public. People can wander up the spiral path to the roof terrace & look down on their parliamentarians all the while. Lots of symbolism in Berlin, like the US Embassy being tucked up against the Brandenburg gate - on the eastern side. 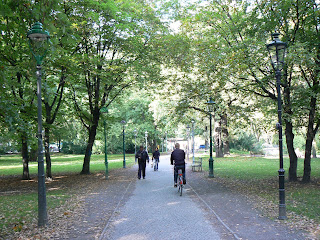 Tiergarten. More a walk in the woods than a garden. Paths popular for commuters, walkers & dogs, bicycles (lots of these). These paths have lamps which are all different- about a hundred of them, from other German & European cities. All are numbered & have a plate with info about their origin, manufacturer etc. An unexpected international collection.
Posted by b&jineurope at 12:50 PM

Email ThisBlogThis!Share to TwitterShare to FacebookShare to Pinterest
Labels: Berlin