This is the most exotic place we have been to. Previously Constantinople & Byzantium, so has a fascinating history, having been at the world's crossroads for many centuries. The only city which straddles Europe & Asia. And a huge city too- various sizes are given between 12 & 15 million. A New Zealand woman we met who has been teaching here for 15 years reckons 20 million would be more accurate - lots of unregistered people who are not legally residents. The skyline it dotted with minarets from the many mosques, some of which are magnificent. We hear the call to prayer from the mosques regularly through the day & early evening. We are in the old part of the city, which happily is close to most of the things we wanted to see. The new parts are all apartment houses, shopping malls & factories, so no different from anywhere else.Traffic is just mad. Crossing roads is a challenge & noise is incessant. Shopping is sensational- we have no room in cases to do much, but there is lots of lovely fabric & leather - scarves, bags, bedding & tableware. Beautiful ceramics & tiles and carpets & rugs galore, as well as metal & silver objects and jewelry of all sorts, cheap & expensive If we never see another carpet salesman it will be too soon!
Weather has been quite good- sunny & in 20's today, but getting very cool at night. We head towards Australia tomorrow for the last few days in Kuala Lumpur. We might find the heat a bit much there, which will be good preparation for the summer! 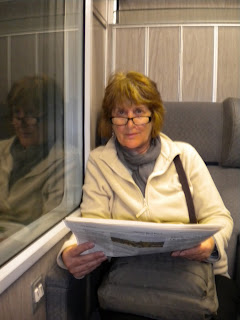 Train from Napoli to Roma. Found an English language newspaper so catching up on world news. 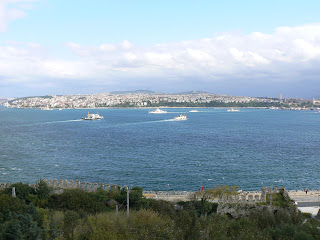 The Bosphorous - looking from European to Asian side. This is a serious shipping channel- being part of the link between Mediterranean & Black seas. Constant traffic of all sorts. 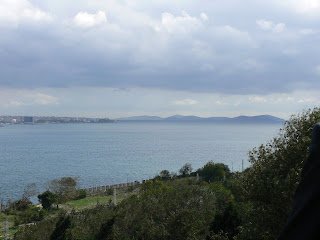 Sea of Marmara. Istanbul is at the spot where the Bosphorous strait meets this sea, so you can see both from many parts of the city, and also the Golden Horn which is a small natural harbour where they meet. Taken from terrace at Topkapi Palace, where the Sultans lived for 400 years (most of the time of the Ottoman Empire) 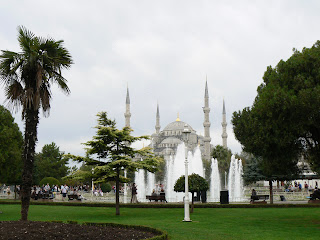 Blue Mosque, one of the largest & most famous. Can go in for a look, but it can be very crowded, and dress requirements mean queues are quite slow moving. 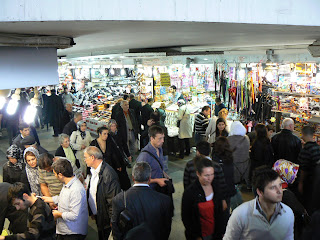 The Turks have always been great traders- in this geographic position they couldn't have been otherwise. This is a subway under a major road. Every subway & lane & road is a shopping opportunity. 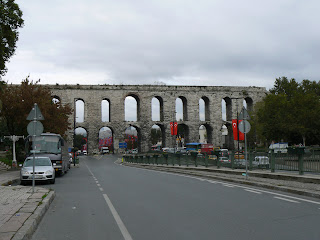 A 4th century Roman aquaduct to bring water to Constantinople from surrounding mountains. There is almost a kilometre left standing- the busy traffic on Ataturk Boulevard goes through 6 of it's arches. The rest are used by more minor roads or businesses.
Important stuff, water- an extrordinary building feat, which must have been considered essential. 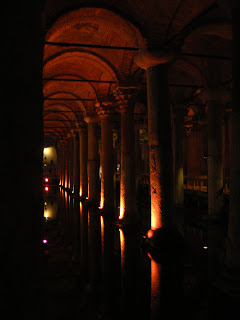 The Basilica Cistern, in the old city. One of the underground reservoirs which held water the aquaduct brought in. No longer in use, but has been restored and you can wander around it under the streets of Istanbul. 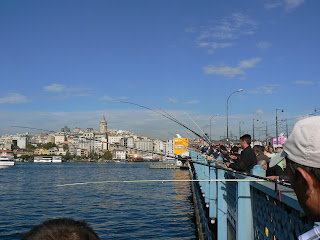 Every bridge & rock near the water is packed with fishermen. Every Turkish man & boy must have a fishing rod. There are still fish to catch, but are mostly small. The chaos of cars right behind them honking & trying to avoid each other don't seem to bother them. Not my idea of a quiet day's fishing. 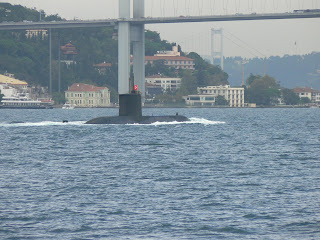 A Turkish submarine travelling up the Bosphorous. 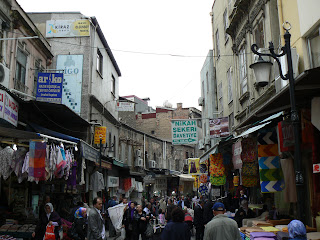 The Grand Bazaar. A maze of lanes with about 4000 traders selling just about anything. 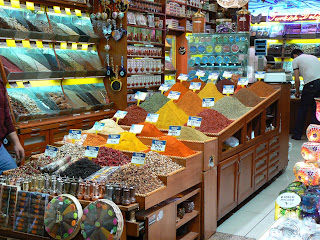 Spice Market - a corner of the Grand Bazaar. Fabulous to look at & to smell. 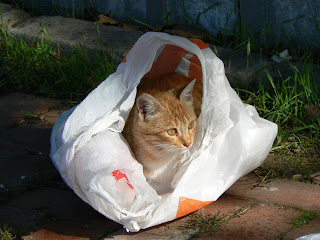 There are heaps of stray cats here. They all seem quite well nourished, so I think they scrounge well -probably from the tourists. They sleep all day on ledges & motor bike seats & shelves & shop goods displayed on the street. They must be a nusciance to many. 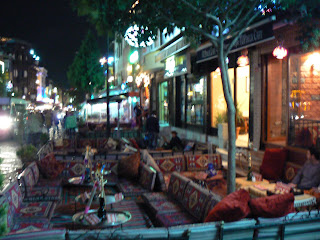 All cafes & restaurants provide hookahs (water pipes) for customers. I'm told they smoke mixtures of tobacco & spices in them - 'nothing harmful'. The restaurants & cafes take a big slice of space- extend across the footpath onto the roadway to the point that 2 cars can't pass without one pulling over somewhere to make room. This seems ok with everyone, but progress through the streets is painfully slow for vehicles. Taxi drivers benefit I guess. And the cars park anywhere, so most footpaths are taken by cars, which leaves the pedestrians walking on the roads dodging the cars & buses. The area we are staying in has wall-to-wall restaurants & carpet shops. Don't know haow thay can all survive. 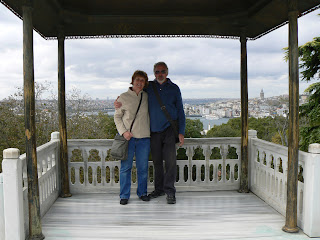 In Topkapi Palace, looking back over Golden Horn. The best views seemed to be from the Palace, which is on a headland where the three bodies of water meet. 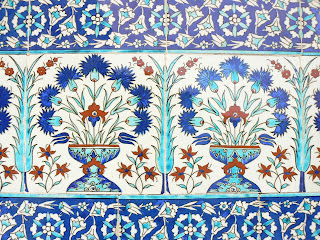 One of the beautiful tile patterns from one of the many buildings we saw which have all different sorts of tiles by the acre on walls & sometimes ceilings.
Posted by b&jineurope at 6:06 AM

Email ThisBlogThis!Share to TwitterShare to FacebookShare to Pinterest
Labels: Istanbul