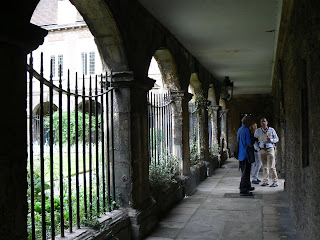 A cloister at Westminster Abbey. We didn't go in- cost too much. But we infiltrated by going to a free concert in an enclosed garden hidden inside the large compound and then managed to tag along with a tour group briefly & see a bit more. 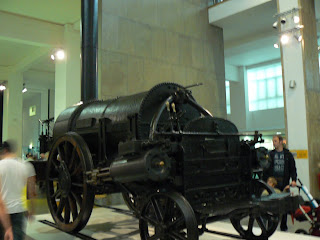 Stephenson's 'Rocket- at the Science Museum. Wonderful Museum & free. We went for a morning & left at closing time 6.30pm. 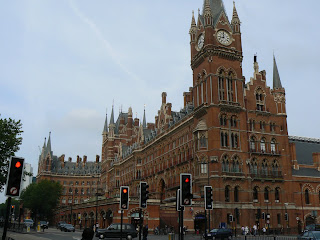 St Pancras Station (!) - I think now the building is being turned into a hotel. Connects to London underground & Belgium & France with Eurostar. 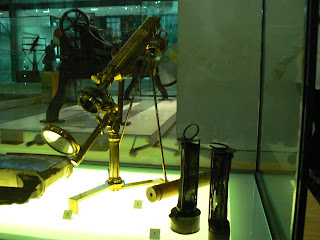 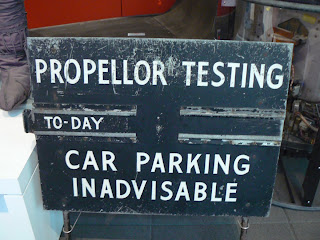 Sign from the (huge) aeronautical section at Science Museum 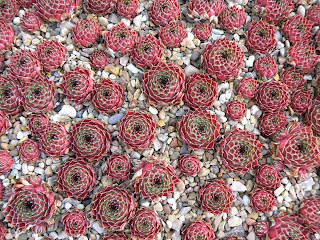 For Karen & Richard - some cactus photos from Kew Gardens. 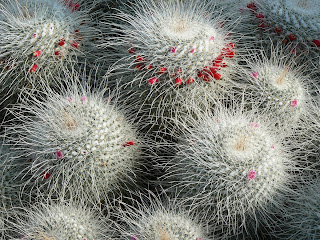 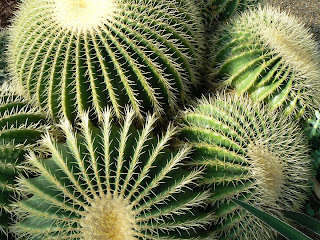 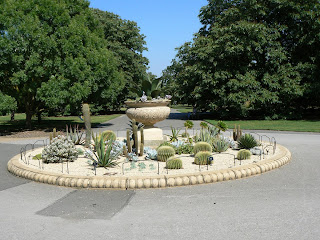 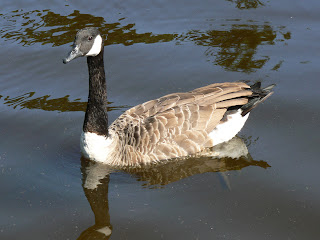 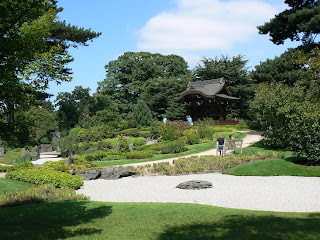 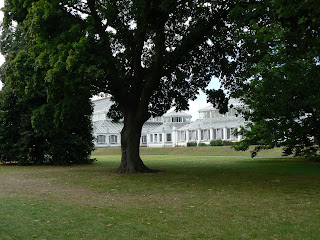 Some of the extensive glass-houses at Kew Gardens. This is HQ for plant lovers around the world. The gardens are huge, with impressive vistas. One day wasn't really enough to see them all, but we did our best. 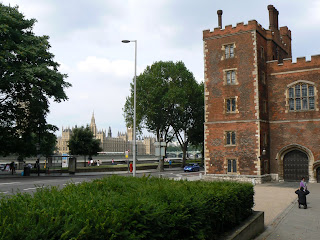 Lambeth Palace (home of Archbishop of Canterbury) with Houses of Parliament in background. 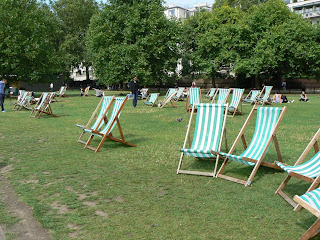 Deckchairs in Green Park -you can hire them for £1.50 per half hour. 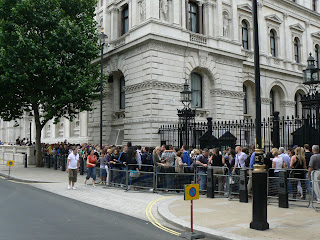 Crowds outside Downing St. This was on a sunday & it is school holidays. We wandered past a few days later & the crowds weren't nearly so large.
London is big bustling & tiring, but I'm inclined to agree with Samuel Johnson- if you're tired of London you're tired of life. There's so much to do. If Art Galleries & Museums interest you, it's all free, and you probably won't find better collections of anything anywhere.
National Gallery has a fabulous collection & can't be rushed through. We went to the National Portrait Gallery too & it was very good.
The Science Museum was fantastic and the British Museum is so vast it's bewildering. Would be best to see it in parts, but we don't have time for that.
But one of the best things is the British Library. In an hour you can see a manuscript notebook of Leonardo da Vinci, the Magna Carta (1 of 4 copies in existence), Lewis Carroll's hand written & illustrated copy of 'Alice in Wonderland', musical scores from Mozart, Handel, Beethoven, Schubert & more, hand-written manuscripts of Charlotte Bronte, Oscar Wilde, Thomas Hardy (draft of 'Tess of the D'Urbervilles') , Sigmund Freud, Charles Darwin, Wordsworth, Scott's diary from his Antarctic expedition, Virginia Woolfe, Paul McCartney's lyrics for 'Yesterday' & 'Michelle' (literally on the back of an envelope), some very early versions of some Shakespeare plays, 'Aesop's Fables' printed by Wm Caxton in 1484 and Gutenberg's 1st large bible printed in 1455. I won't go on. Had to sit down & compose myself. There was also a map exhibition with some very early maps (including some of Capt Cook's & Mercator's, although we didn't see them- may be being rested. We only went there for a couple of hours, and we didn't get off the ground floor!
Apart from that, we've wandered around the monopoly board and found plenty else of interest. Our hotel is near Kings Cross/St Pancras Station so transport is easy. Re-loaded Karen & Richard's Oyster cards & are zapping all over. Buses good & plentiful too, and you see more than on underground.....J
Posted by b&jineurope at 1:27 PM