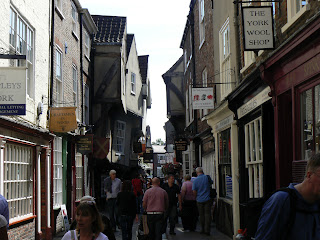 It obviously draws crowds of tourists. The little streets get very crowded. This one has buildings which almost meet as the 2nd story gets wider than below. It seems like a film set- too good to be true. Pubs, cafes & restaurants everywhere.
Ghost tours are big here, and shops selling weird creepy ghostly things. We saw 4 walking ghost tours the evening we were wandering about, and they had a huge group of followers. I guess if you're looking for ghosts, this is the place. 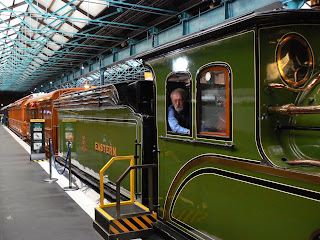 Casey Jones at the terrific National Railway Museum in the old York Station. York is the biggest railway junction in the country. There is every train here from the Flying Scotsman to a Japanese Bullet Train. Heaven for train spotters, but we enjoyed it too. 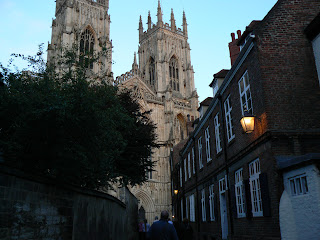 York Minster dominates the older part of the city and is a good landmark. It's easy to lose your bearings in those narrow cobbled streets. It's the largest gothic church in Europe, so probably also in the world. 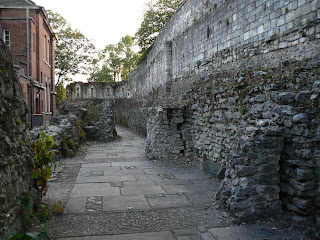 Ruins of an Abbey, showing it's various construction stages. There were a few squirrels climbing over it. They're quite cute.
Archeology here is on steriods. The archeology dept of York University must be large! They know where the various occupiers sited their cities. The Viking one has been excavated & closed. Open now to public & you can have a bit of a dig yourself now. They got items galore out of it and have set up a big viking centre, which we didn't have time to see. The Roman dig continues. Last year they got 87 skeletons out, which they think were gladiators as the wounds could only have been inflicted by the teeth of large animals like lions. The fascinating thing for me was that they didn't find one gladiator taller than four feet. Most were 3'6'' to 4'. Not really the picture we have of a strapping gladiator is it? They haven't yet found the circus where this sport took place. 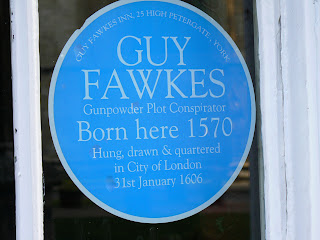 A famous (or infamous) son of York 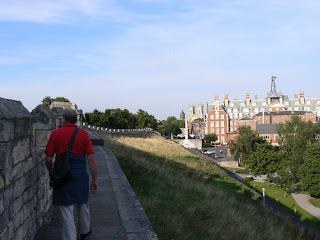 Picked up hire car in Northampton. Now we have to be grown up and navigate for ourselves.
Headed north through Robin Hood country, past Sherwood Forest, with an overnight stop in York. York should never be just an overnight stop! We saw as much as we could of this almost 2000 year old city in 24 hrs. It still has large sections of it's city wall, and in places you can clearly see the Roman origins with the Viking & Norman additions. 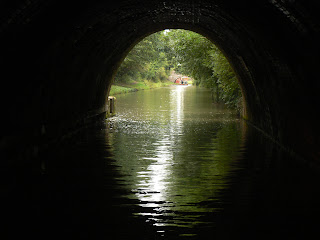 One last canal photo. There were some quite long tunnels and watching that pin-prick of light in the distance slowly become larger was mesmerising.
Most of us had a mishap or slip at some stage. The rain made the banks a bit slippery, but no-one fell in the canal, although Eric did get his feet wet. Barry had his glasses ripped off into the canal by an overhanging twig when driving boat one day. Happily not his new (expensive ones)
Posted by b&jineurope at 8:48 AM